As far as I know, English has always been used as a strategy to share the gospel here in Japan. The reason is quite simple: interest. The average Japanese has maybe heard of Christianity and the Bible but knows nothing about it and has no interest in learning more about, as they see it, a “foreign” religion. However, there is generally a big interest in English. English is the international business language, so learning it is very useful to such a business-centric culture like Japan. Also, Japanese has borrowed and implemented a lot of English words and American culture is prevalent here. This also fosters a lot of interest in learning the language. But perhaps more than all of these things, English classes that I have been a part of in Japan have been attractive to the Japanese because of the social aspect of it. They want to learn English but the real draw are the friends they make in the class. Seeing this interest in English and having no shortage of native English speakers, ministries here have been offering English courses to the community with an included time looking at the Bible. This isn’t us advertising English and then when they arrive saying, “Oh, by the way, we’re going to talk to you about God instead.” Usually a full hour of English is taught using textbooks or other materials followed by further English practice using the Bible as a textbook. The Bible times at the end are optional and they are aware of it from the start. I’ve never had a student who has objected to hearing about the Bible at English class. It’s a great way to get to know people in the community and for people who have maybe never read the Bible to hear gospel truths each week.

I’m currently teaching an English class once a week at the church we go to in Okazaki. A while after we had started going there, people found out that I had a Masters Degree in teaching English and they begged me to start up a class. There was a big interest from the beginning and I was glad to do it. Because of school and other reasons, the class starts at 8pm which is a bit late for some people but most who come to my class do not go to church so I am excited to be able to go through parts of the Bible with them during our class each week. I just pray that God uses that in their lives and brings them to himself. 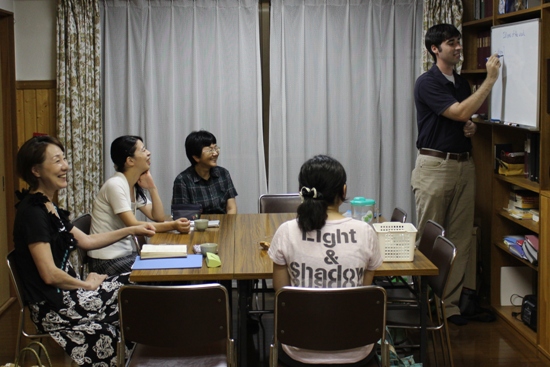