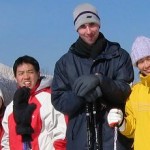 While Michael served as an intern in Chiba, Japan, God revealed to him the need for the gospel in this nation where many have never heard the message before. His heart for the Japanese led to a desire to do long-term ministry in Japan. In order to be better equipped, he returned to the U.S. where he earned master’s degrees in biblical studies and teaching English as a second language. 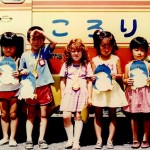 For over two years Cathalain’s family was stationed in Japan. She was exposed to the Japanese culture by living off base and attending a Japanese school. Although Cathalain was young, this experience shaped her love for other cultures. After graduating from Florida Southern College she taught high school in Virginia.

Michael and Cathalain met in Virginia, were married in May 2007 and had their son in May 2010. In 2011 the Carters returned to Japan together and began two years of intensively studying Japanese at The Yamasa Institute located in Okazaki, Japan.  During language school their second child, a daughter was born.

Upon completion of language school they moved to northern Nagoya to intern at Shiga Church. This internship providing invaluable experience as both Michael and Cathalain learned much about ministry in the Japanese context under Pastor Aoki.  During the two year internship, the Shiga leadership also came alongside the Carter’s vision to church plant in downtown Nagoya by committing various financial, prayer, and leadership resources. Before heading back to America for a year of Home Ministry Assignment Cathalain gave birth to their third child, another daughter.

In the Fall of 2015 Michael was ordained in the Blue Ridge Presbytery.  The Carters returned to Japan in March 2016 after a year on Home Ministry Assignment in the United States.  They began various outreaches in their church plant target area but were struggling to gain traction since finding space was so difficult.  Michael approached the elders at Shiga Church and asked for their help and guidance.  Their response was to start a monthly prayer meeting specifically for the church plant that all the elders would commit to attending.

Within one year of starting the prayer meeting in October 2018, the Japanese Presbyterian Mission in partnership with the Japanese Presbyterian Church purchased what is currently the Nagoya Ministry Center in downtown Nagoya. At the end of April 2019 the Carter’s moved into the upper floors of the ministry center and a few days later Cathalain gave birth to their fourth child.  In June the full remodel of the three story building was completed.

Today the Carters are fully dedicated to church planting in downtown Nagoya alongside Shiga Church. They help facilitate an English outreach program, cooking classes, prayer meetings, Bible studies, a Concert Series, mini gallery/Art’s Ministry and have various responsibilities in the community.  The Session and church plant vision team, along with the Carters, launched worship for the new church in April 2021.  For one year the worship was limited to the vision team who worked together to solidify a vision for the church and the specifics of how church would “be done.”  In April 2022 they have opened their doors via a “soft launch.”  During the soft launch they aren’t publicizing the church, but are focusing on inviting friends, neighbors and contacts.  They prayerfully hope to hold a “grand opening” on January 22, 2023.  Pray for all the preparations still needing to be completed that were delayed multiple times due to the Corona Virus.